What Will Make Cardano Smart Contracts Different and Powerful? 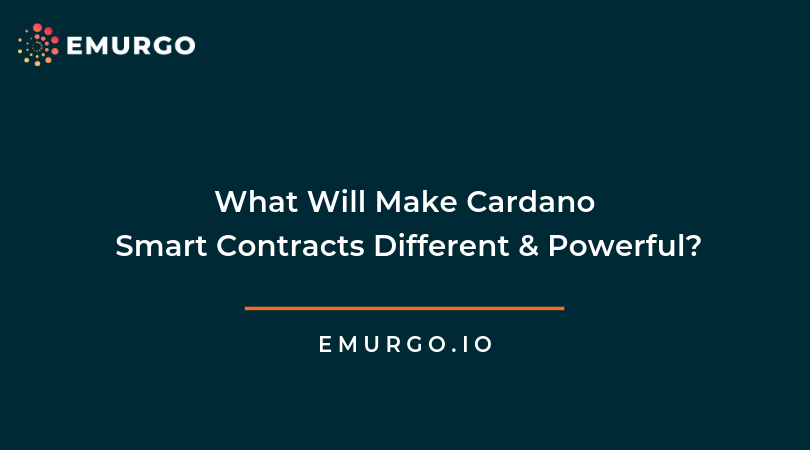 In our daily lives, we enter into many different kinds of contracts. These contracts are agreements that involve an exchange of value. These agreements can range from simple to complex, from buying a morning coffee to signing a mortgage for a house. Cardano, the first third generation blockchain to evolve from a peer-reviewed philosophy, will launch in the coming future its own smart contract platform, Plutus. The goal of Plutus is to model the widest range of contracts that exist in the world today in the form of digitally secure & programmable smart contracts.

What Is A Smart Contract?

A traditional contract is a legally-binding agreement concerning sales, loans, purchases and more. For smart contracts, that traditional contract will exist in a programmable, digital form on the decentralized Cardano blockchain that is scalable, sustainable, and interoperable. The concept of “agreement” will be eliminated from contracts. Instead of an “agreement” (such as signing a contract, shaking hands or verbally agreeing), Cardano smart contracts will ensure that there is a software-ensured digital guarantee that no one involved is able to undermine the contract through bad actions. Cardano smart contracts will not rely on the actions of individuals, companies or governments to execute a smart contract. Instead, they will rely on the execution of a self-coded smart contract to control the transfer of funds between a contract’s participants. If certain conditions are met by parties, then a certain outcome will be directly self-executed as these conditions will be digitally coded into the contract.

The outcome of these smart contracts will live forever on the distributed Cardano blockchain. Participants will engage in smart contracts exclusively on the distributed Cardano network. This will guarantee all details of a contract are digitally recorded securely and reliably. Cardano will become a global bookkeeping system for individuals and companies globally, especially as it is built to last generations and be the protocol of choice for parties needing to handle large-scale data.

As Cardano is the first third-generation blockchain to evolve out of a scientific philosophy and research-first driven approach, Cardano is built to be scalable, sustainable, and interoperable with other blockchains & legacy systems.

Compared to other blockchain protocol projects, Cardano is very unique and different in a few regards: protocol development based on peer reviewed research, usage of high assurance code found in the highest levels of engineering, and usage of Haskell as a functional language for secure development of the protocol.

Smart contracts for Cardano will need to be written in Plutus or IELE and is intended to support a higher level of assurance. Plutus is a smart contract language using Haskell programming language. Haskell is recognized at the academic and developer level for its mix of academic and industry-grade talent with core credentials in computer science. Thus, writing smart contracts will be safer and more reliable than any other smart contract language.  Plutus Platform will be a Haskell library and will be an accessible toolbox for developers to create smart contracts and can support code that runs on-chain and off-chain. Due to peer review and high assurance, the code for the Cardano smart contracts is secure, tested, and documented. Ultimately, it is this research-first driven approach used by a professionally credentialed team of academics and cryptography experts that separates Cardano and Cardano smart contracts from others in the space.

The future power of Cardano smart contracts resides in the ability to be a binding & trusted entity for the transfer of stakeholder assets. These stakeholder assets are required for the parties involved to participate in a contract. The assets that will be transferred within the contract will be done so according to a set of rules agreed to by the parties involved and programmed into the contract. However, funds committed to a smart contract will never be “locked up” for an infinite amount of time. The authors can ensure that there is a timeout in place, so that funds are returned after a certain period of time.

A smart contract written and programmed in Plutus on the Cardano blockchain gives each party involved full visibility of exactly what the contract entails. When written correctly, it would be impossible for a single bad actor to participate in an adversarial way.

Cardano already allows transfers of value and transparency of ADA transactions through the EMURGO-developed Seiza Cardano Blockchain Explorer. For example, EMURGO led a campaign for ADA holders to use Cardano’s underlying digital asset ADA to purchase food items at the main Osaka branch of “BBQ Restaurant Tamura.” This demonstrated real ADA utility and the ease of use of the EMURGO-developed Yoroi Wallet to send and receive ADA. All ADA transactions can be viewed in real-time on Seiza.

Crowdfunding has emerged throughout the last decade as an egalitarian, distributed way of raising seed capital. This seed capital, contributed usually in small amounts by a large number of people, helps to build a project to completion. Once the project is fully funded, the final product is created and then delivered to the financial contributors. If the product is not fully funded, the money that has been raised is returned to the financial backers. This is a popular way of raising finance that bypasses traditional venture finance or start-up loans.
As we have seen above, a contract is a form of agreement. Within the context of crowdfunding, this agreement can be clearly seen. If a project doesn’t receive enough funding, the money is returned to the contributors. If it does, the money is used to fund the project.

A smart contract created on the Cardano blockchain could be used to represent crowdfunding campaigns with transparency and the security of knowing that if specific conditions aren’t met, funds will be returned to the contributors. If a certain amount of time passes and the project’s target is not met, the money is returned to the backers. If the goal is met, the money would be released to the project creators. In both of these scenarios, the contract is affected by the passage of time (limited time fundraising campaign) and the actions of others (sending value).

This is just one of the countless use cases for Cardano-based smart contracts in the coming future.

What is Plutus Core?

Smart contracts running on the Cardano blockchain will be written in a programming language called Plutus Core. Creators of smart contracts do not write in Plutus Core directly however. Rather, they will write contracts on the Plutus Platform as mentioned before. This is a software development kit (SDK). A software development kit can be thought of as a tool box and workbench which helps a builder or developer build things. App developers use SDKs to develop apps for mobile platforms using code that a human can understand, but which will be run in a way a computer understands. The Plutus Platform will allow developers to write smart contracts in an easy to understand way, which will eventually be run on the core Cardano blockchain as Plutus Core.

In conclusion, Cardano’s blockchain smart contracts will be an extremely effective digital way of modelling & executing real world contracts. Contracts and agreements regarding value fundamentally shape our financial world. These contracts, when written on the Cardano blockchain, offer the value of giving full visibility to all participants of the contract, while also being extremely secure and self-executing according to the programmed conditions. Developers will be able to use the Plutus Platform to create complex yet effective ways of securely transferring value and provide services to an enormous amount of people worldwide.