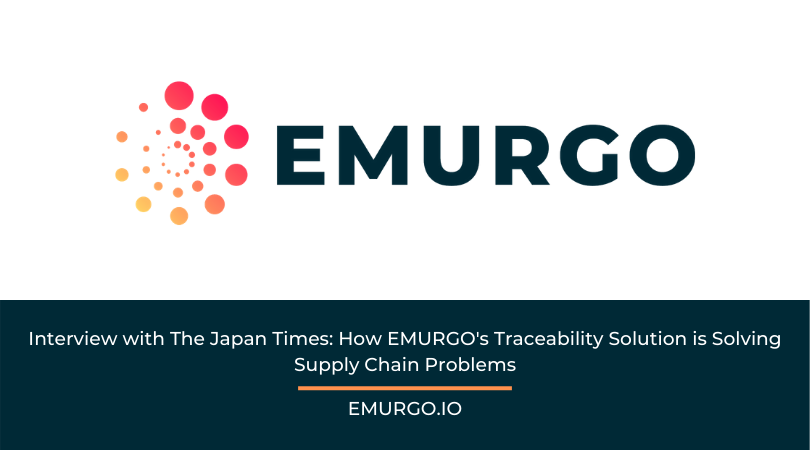 **This article has been reposted here for viewing purposes only. All credit goes to The Japan Times and the original writer. The original interview can be accessed here.

Randeep Melhi wants to rethink the relationship between food consumers and producers. “Imagine having a cup of coffee in Tokyo and scanning a QR code to find out who grew the coffee beans,” he says. “Then imagine being able to tip the producer directly from your smartphone.”

Melhi’s vision of the future isn’t too far off. As chief commercial and chief operating officer of the blockchain technology company EMURGO — which has offices in five countries, including Japan — he’s well aware of blockchain’s potential to revolutionize food supply chains.

EMURGO’s blockchain-based traceability solution, launched last year, is being used by 500 coffee farmers in Indonesia. While the system doesn’t yet support direct tips to producers, its benefits include empowering farmers to bargain for higher prices for their coffee as they’re now able to prove what kind of beans they’re growing, and how.

In Japan, blockchain is being trialed as a substitute for traditionally opaque and paper-heavy exchanges in products ranging from seafood to sake. The technology promises to improve efficiency, effectiveness and transparency by making trusted information available to all stakeholders from farm — or ocean — to table.

Blockchain was created in 2008 as an accounting system for Bitcoin, but its uses go well beyond the realm of cryptocurrencies.

A blockchain is a digital record of all the events that occur within a network, in which each new event (or block) is locked into a chain composed of all previous events. The data, which can’t be altered, is managed by multiple computers and shared between all participants.

“It’s a better database,” Melhi says. “Say, for example, that I owe you ¥500. I write this down on a piece of paper and give it to you. Later, when you come to settle the debt, I claim that I owe you ¥400 because I don’t believe what your piece of paper says. And then it becomes a case of he said, she said.”

In the blockchain, the IOU is announced to the entire network and everybody makes a note of it. “So when you come to collect the money, anyone can verify the information.”

Trust, built by openly sharing information, is a key element of blockchains. It is also a fundamental attribute when it comes to food traceability, especially as consumers demand to know more about where their food comes from.

By using EMURGO’s app, which traces the produce of 500 Indonesian coffee makers, customers in cafes all over Indonesia can find out the exact story behind each cup of coffee, including the farmers who grew the beans.

One of the big players using blockchain in this sector is IBM Food Trust, launched globally in 2018 with the backing of 11 agri-food companies including Walmart, Dole and Nestle.

This type of technology is still experimental in Japan, with pilot projects targeting products such as organic vegetables, sea cucumber and game meat. IBM Food Trust is involved in the “ocean to table” pilot together with partners including Seafood Legacy, a sustainable seafood consulting company based in Tokyo.

Blockchain is being used to collect and share detailed information about sea perch caught in Tokyo Bay. The fish can be purchased online at Earth Mall with Rakuten, and the data, gathered directly from the vessel, will be made available to consumers through the Ocean to Table app, due to be launched this year.

“Fishermen have so many stories. As well as data, the blockchain carries the stories that consumers want to know,” says Shunji Murakami, vice president of Seafood Legacy. The app integrates the data in a way that consumers can understand and use by providing recipes, and information about where fisheries are operating and where seafood can be bought, Murakami explains.

Choosing traceable products is an important tool for consumers to reward quality and sustainability. It also improves the data — and therefore the science — behind food production, which is essential to better resource management. As part of the ocean-to-table project, fishermen record where sea perch is caught as well as information such as fish species and fish size. This data is then locked into the blockchain, which means that it can’t be tampered with and it becomes accessible to anyone within the network.

This allows Seafood Legacy to verify that fisheries respect international sustainability and traceability best practices, and the solid data improves the assessment of sea perch stocks, as Murakami explains. “Fish stocks in Japan, and in the rest of the world, are facing a crisis”, Murakami says, with annual catches precipitating by 65% in Japan over the past 30 years. Therefore, detailed and accurate information is especially important when it comes to managing the impact of fishing.

In addition, Japan’s new fishery law targeting illegal, unreported and unregulated (IUU) fishing was approved at the end of 2020 and sets tougher rules for traceability and catch documentation for certain species.

“Though Tokyo Bay sea perch isn’t a required species, we’re targeting fisheries such as this one, who are willing to adopt this type of blockchain-based initiative, to prove its value,” Murakami explains.

Gathering information about every step of the food supply chain can also help ensure a product’s quality. This, to Hidetoshi Nakata, is key. After retiring from a successful career in soccer, he spent years traveling all over Japan learning about its unique crafts. In 2015, he founded Japan Craft Sake Company, which promotes global awareness and develops solution-based systems for Japan’s traditional industries and sake producers as well as distributing sake abroad.

“The most important thing for us is delivering sake in the best condition on behalf of breweries. But how can we guarantee its quality?” Nakata asks. In this sense, blockchain is a powerful solution to the challenges facing this relatively novel export market and, in 2018, Nakata came up with the idea of creating a blockchain-based system to monitor sake’s cold chain by recording the temperature at which bottles are stored, and for how long, at every stage of their journey.

“Through this system, we can guarantee products’ quality and gather all the relevant marketing data, such as which restaurants in which countries are selling which sake,” he says.

The “Sake Blockchain” is currently being used to track brewery sales in several Asian countries, but Nakata aims to bring more makers onboard and expand the system internationally. He also plans to integrate the blockchain system with Sakenomy, Japan Craft Sake Company’s app that helps consumers understand notoriously hard-to-decipher sake labels by providing product information as well as an e-commerce platform.

Nakata’s goal, however, goes much further. “We’re creating a system that can be used for any product, such as shōchū, soy sauce, miso, Japanese tea … not just for sake.”

Bringing different actors together onto a single network is one of the principal benefits, but also one of the greatest challenges of digitizing food supply chains using blockchain.

Persuading people as to the usefulness of this model takes time. There’s still a lot of skepticism concerning blockchain, which is too often associated with scams and anonymous users, according to Melhi.

“In fact, it’s the opposite of anonymous, as every transaction is traceable,” he says. “The challenge with blockchain isn’t the technology itself, but convincing people that it’s sensible and legitimate.”

Sharing the same information at the same time with everyone on the same network can be very powerful, Melhi points out, as more knowledge enables anyone — from those who are making the food to those who are eating or drinking it — to have the power to make better choices.

“This only works if everyone is on the same network; reaping the benefits requires collaboration,” he says.