What Is EMURGO Doing Globally Outside of Asia to Drive Cardano ADA Adoption? 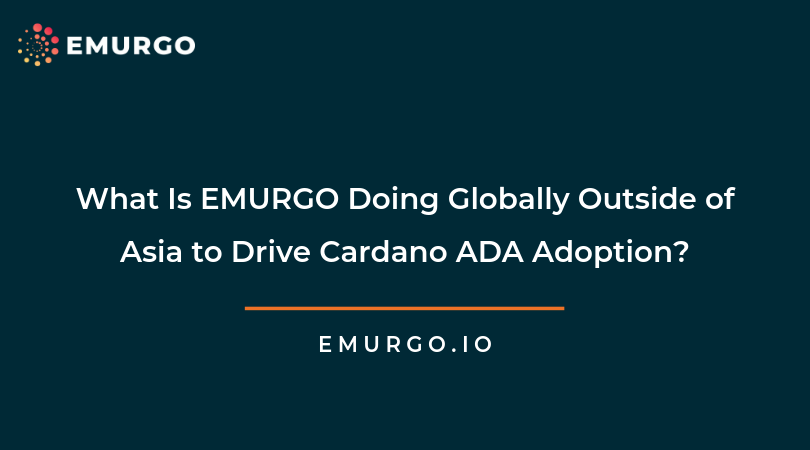 As the official commercial arm focused on driving the global adoption of Cardano and bring value to ADA holders, EMURGO has placed a high strategic importance on having an international vision. The Cardano community is certainly global in nature and definitely wouldn’t be the strong project it is today without the efforts and interests of Cardano community members from markets all over the world.

Headquartered in Singapore with global operations staff in Tokyo, Japan and a founding Japanese heritage, EMURGO has a strong network foundation in Asia. With that in mind, EMURGO has also recognized the importance of expanding awareness and real blockchain engagement in markets outside of Asia to eventually build a more robust and diverse Cardano ecosystem.

Thus, EMURGO has already actively put a strategic focus in place to push forward brand awareness of Cardano and eventual adoption of Cardano as the protocol of choice in markets outside of Asia. The following in no particular order, highlights EMURGO’s active plan in motion to drive awareness and real blockchain engagement in these markets.

EMURGO has already “graduated” the first batch of four startups and Cardano fellows such as Syre solving Cardano ADA transaction surety, and are looking for other blockchain startups to support in Q3 2019. So please apply if you feel like your project can help address real world issues and bring utility by leveraging Cardano’s third-generation blockchain that is built to address scalability, sustainability, and interoperability.

Secondly, EMURGO joined the U.S. Chamber of Digital Commerce – the world’s leading trade association representing the digital asset and blockchain industry – as part of its influential Executive Committee in June 2019. The Chamber is comprised of leading multinational corporations, enterprises and startups in the blockchain and financial industries to promote the adoption of blockchain-based solutions and digital assets, especially in North America. This aligns with EMURGO’s strategic objective to support the cultivation of a genuine blockchain ecosystem thereby promoting the drive of Cardano adoption to potential stakeholders and bringing value to ADA holders.

The Chamber serves as a trusted resource to regulators and policymakers internationally in an effort to shape pro-growth blockchain-related policies. EMURGO, as an Executive Committee member of the Chamber, will be a part of this discussion via participation in the Chamber’s expert working groups and policy initiatives.

Recently, EMURGO’s CTO Nicolas Arqueros was invited by the Chamber to give a special presentation about the utilities of Cardano blockchain at Congressional Blockchain Education Day in Washington D.C. to trusted policymakers and enterprises.

EMURGO’s CFO & CIO Manmeet Singh also spoke earlier this year in an exclusive discussion at DC Blockchain Summit – a Washington D.C.-based conference geared towards government officials and enterprises – about Cardano and the future of digital tokenization.

Thirdly, EMURGO also earlier this year made an investment into New York-based Y2X, the leading digital merchant bank for the decentralized economy. Y2X helps entrepreneurs raise capital for expansion through Securities Token Offerings (STOs) and other means. Cardano will become the protocol of choice for Y2X and its portfolio firms, especially in the field of regulated STOs, therefore providing an increased value add to ADA holders. Y2X’s co-founders J. Todd Morley & Dave Shuler, come from established backgrounds in finance on Wall Street, together bringing a wealth of professional expertise and global networks to build the platform.

Thus, our strategy in the Americas and markets outside of Asia is to engage with a variety of influential stakeholders and promote the utilities of Cardano as the protocol of choice; offer quality blockchain education programs; provide opportunities to quality startups with real use cases that show synergies with Cardano; and invest into projects that have the potential to have high strategic value to an expanded user base within the Cardano ecosystem. This versatile approach enables EMURGO to spread awareness and market Cardano to drive adoption, and also invest to directly add into the Cardano ecosystem.

If you have any questions or would like to reach out to our EMURGO, please feel free to do so on our Twitter or through our site!