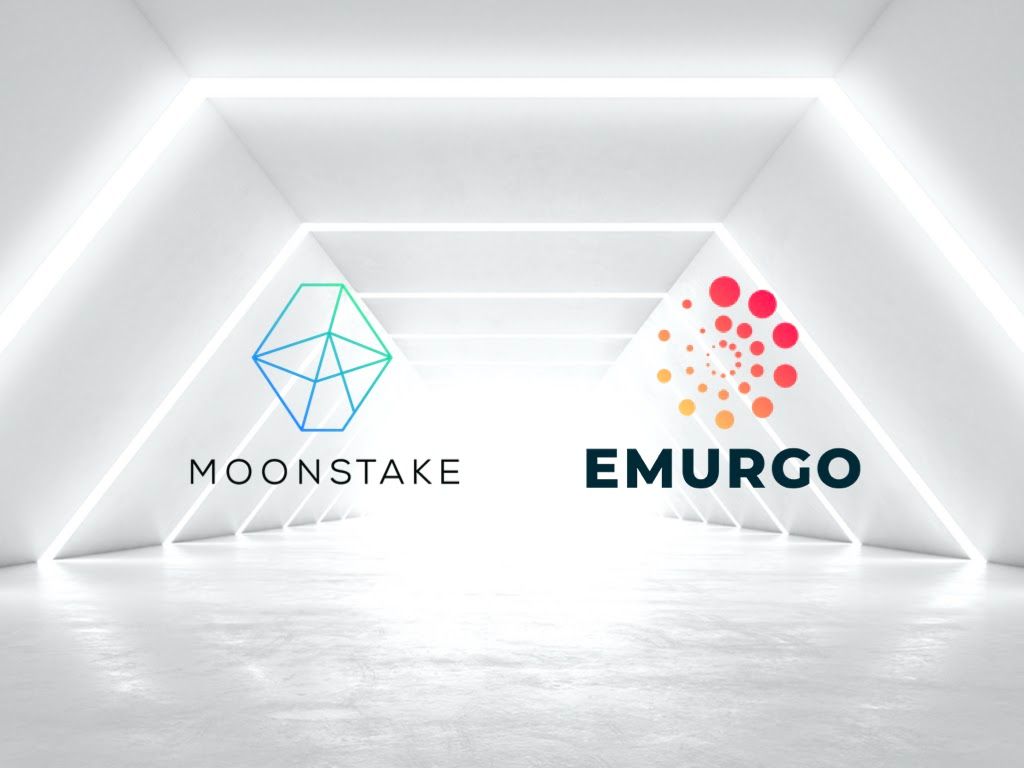 We are pleased to announce that Moonstake has signed an MOU partnership with EMURGO, a global blockchain solutions provider & a founding entity of the Cardano protocol. This partnership will create synergies by jointly driving blockchain staking activity and accelerating industry adoption of staking within Cardano’s ecosystem.

Moonstake is an advanced technology company with specific focuses on blockchain and staking technologies to build Asia’s Biggest Staking Network. Moonstake was established to develop a staking pool protocol to satisfy increasing demands in regional and global blockchain markets.  Signature products include Moonstake Web Wallet along with Moonstake Mobile Wallet（iOS / Android) enabling full staking functions and to be an all-in-one gateway for users to maximize the usage and potential of cryptocurrencies. Currently, Moonstake’s staking pool supports Cosmos, IRISnet, Ontology, Harmony, Tezos, and will also support Cardano ADA thereby providing current users with the flexible option to adopt ADA for staking purposes and increase the number of ADA users. Partnered with OIO Holdings – a publicly-listed Singapore-based company – to carry out active marketing activities across the region to boost its wallet and staking services, this partnership will also further broaden awareness of EMURGO and Cardano ADA.

EMURGO is a global blockchain solutions provider & a founding entity of the Cardano protocol, with strategic locations in Singapore, the USA, India and Indonesia. Being a pioneer in the space of blockchain, EMURGO enables pragmatic blockchain solutions for developers, startups, enterprises and governments by leveraging Cardano – a third-generation blockchain protocol driven by a research-first approach. EMURGO works closely with IOHK and the Cardano Foundation, to promote Cardano’s global adoption and growth of its ecosystem, by building, investing, and advising projects and organizations that adopt Cardano’s decentralized blockchain ecosystem.

Recently, Cardano – the leading globally recognized proof-of-stake blockchain platform & the first to be founded on peer-reviewed research and developed through research-driven methods – launched the long-awaited Shelley Mainnet. The launch of Shelley has now brought about opportunities for ADA users to stake their ADA and help Cardano transition from a centralized, federated system to a fully decentralized one with delegated staking features & rewards incentives. Shelley is the most significant upgrade to Cardano since its inception, bringing about a new system architecture and an entirely new set of user functionalities.

Moonstake has already set up 3 initial validators in Cardano ADA pools for staking and more validators are to be added soon. During this initial period, the partnership will conduct a thorough technical evaluation in line with the upcoming full-scale implementation of these ADA staking pools to verify compatibility. A number of ADA holders and partners are committed to supporting Moonstake’s staking pools once its web and mobile wallets gain full functionalities. Soon, Moonstake’s ADA pool is set to become one of the biggest staking pools and users will be able to securely and easily participate in ADA staking pools.

“We are excited to partner with Moonstake, which is committed to creating Asia’s biggest staking pool network. We believe that this partnership further boosts Cardano’s decentralized blockchain ecosystem and grows the wider blockchain community.”

“Cardano brings a new standard in technology – open and inclusive – to challenge the old and activate a new age of sustainable, globally-distributed innovation. We believe the partnership with EMURGO will create a new era of staking across Asia.

Moonstake was recently established to develop a staking pool protocol to satisfy increasing demands in regional and global blockchain markets. Staking adopts Proof-of-Stake (PoS) as a type of consensus algorithm which allows cryptocurrency holders to increase the likelihood of receiving block rewards from its block validation transaction. It brings together the ability to stake and ultimately distributes block rewards based on contribution. Moonstake develops a staking pool protocol and provides business services through partners and companies. Staking is expected to help elevate the blockchain technology and work for decentralization.