Blockchain Primer: The Four Pillars of a Cardano ADA Transaction 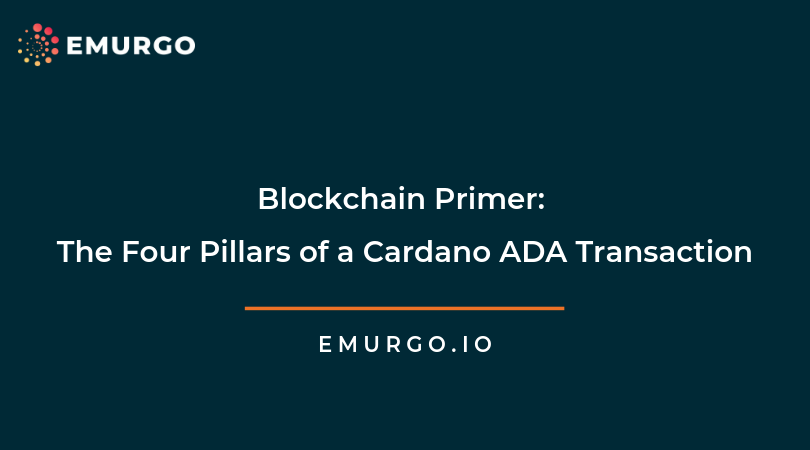 Transactions are a cornerstone to our daily lives. On a daily basis, we transact to pay for our groceries, to send money, to finance assets and much more. Cardano, the first third-generation blockchain to evolve from a scientific philosophy, allows users to make transactions globally using its native cryptocurrency, ADA. There are four pillars on which a Cardano ADA transaction is built.

In this blog post, we  will look at these four pillars specifically within the context of Cardano ADA.

The first pillar of a Cardano ADA transaction are the assets involved. An asset is something of value that a person owns. For a craftsman, their assets would be their skills and expertise. A person who owns a piece of land also owns an asset. In our daily lives, these assets are often traded for a common currency, which also has value. ADA is an asset that lives on the Cardano blockchain. This has value for users utilizing the Cardano blockchain and can be exchanged for goods and services. This is the first pillar on which the Cardano ADA transaction is founded.

Earlier in April 2019, EMURGO announced the development of Seiza – a new feature rich Cardano blockchain explorer –  that was subsequently launched for public usage in May 2019. Seiza allows users to track their ADA transactions and other vital information related to the Cardano blockchain including wallet histories, addresses, block size, and stake pools, among others. This essential Cardano ADA product will become increasingly important as Cardano moves toward full decentralization with staking, stake pools, and increased ADA liquidity with the Shelley era.

The next pillar that a transaction is built on is the people involved. Knowing who you’ll send an asset to is a key component for exchanging value. Regardless of the type of transaction you want to make, this is a key pillar. You don’t want to pay a barista who isn’t making your morning coffee. You want to pay the person who is actually putting together the drink.

A safe and easy-to-use wallet is needed to efficiently send ADA to another person. This person must also have a wallet which can safely store and receive ADA. An EMURGO-developed wallet which serves this purpose for users is the Yoroi Wallet which is meant to be a “financial gateway to the future.” This gives ADA holders a way to interact with and send their funds easily to other users.

Recently, EMURGO brought crypto payments using ADA via the EMURGO-developed Yoroi ADA Wallet to the famous Japanese celebrity comedian Kenji Tamura’s restaurant, “Charcoal Grill BBQ Tamura.” This means that anyone can pay for an item on the menu with some ADA and transact easily with one another. The Yoroi Wallet is purposely built to be secure with a simple user interface & experience to make transacting with ADA as smooth as possible, and thus far has received outstanding user reviews in the Android, iOS, Chrome, and Firefox stores.

There are many other examples of merchants, restaurants and outlets that have accepted ADA as a form of payment, including EMURGO’s ADA Crypto Card campaign that successfully sold out in South Korea earlier this year.

Every transaction has a story. Metadata is the story of why you are making a transaction. For example, if you are paying your rent via bank transfer, you may want to include this information into the bank transfer itself so the person knows the reason why this transaction is taking place. This type of metadata or “why” a transaction takes place can be seen in credit card statements for things like recurring subscriptions.

For example, if a person wants to pay in ADA for a work of art created by someone, the artist simply needs to create an invoice using Syre, include an optional message of “why” this transaction should take place, and then send them the invoice for fulfillment. Syre will allow an easy way for users to create a story around their ADA transactions in a secure way and will also give users peace of mind that they are sending their ADA to the correct intended address.

The final pillar that a transaction takes place on is the regulatory environment the transaction takes place in. This pillar is required to determine if a transaction is legitimate or not. This is needed in both traditional, legacy financial systems and newer, blockchain-based financial systems. Within Cardano, there is no central party who decides if a transaction is legitimate or not. Stake pools and stake pool operators are those who validate transactions on the Cardano blockchain. This is because, with the launch of Shelley, Cardano will be a fully distributed, decentralized, blockchain using Proof-of-Stake as its consensus mechanism.

In conclusion, there are four key pillars that a Cardano ADA transaction is based on. These four components are the asset (Cardano ADA), the people (Cardano ADA holders), the story and the regulatory environment. These are fundamental to a transaction that takes place in the legacy financial system or a blockchain-based system such as Cardano. As we have seen, there are a number of exciting services available and soon to be available to help make transactions as easy as possible with ADA. These include Yoroi, Seiza and Syre, with more on the way!